In a Stern-Gerlach experiment, the arrival of an atom at a measurement counter is a random process. I would like to use the results of the experiments to answer the question:

What is the probability \(\mathcal{P}\) that an atom will arrive at the top counter?

In the case where all the atoms arrive at the top counter, the probability is 1. However, what if I send 10 atoms through the analyzer and detect 3 atoms in the top counter? How confidently can I conclude that the probability is 0.3? What if I repeat my experiment and send 10 more atoms though the analyzer but detect 4 atoms in the top counter? I probably want to revise my estimate. If I do a bunch of sets of experiments, I will get a distribution of probabilities. Therefore, I'm going to need statistical tools to answer my questions:

\(\mathcal{P}\) is the “true value” of probability of ending up in the top counter for the physical system (measuring \(S_z = \hbar/2\)). (This probability is the number that I'm trying to experimentally estimate.)


In 1 Stern-Gerlach experiment, as single atom passes through the analyzer and is detected at a counter.


I'm going to do a bunch of experiments and organize them into \(N\) sets. Each individual set \(n\) will include \(M\) particles being sent into an analyzer and counted in a counter.

For example, I can click the "10k" button and send 10,000 particles through the analyzer (i.e., 10,000 experiments). I can record the number of particles in the top counter and then repeat so that I end up with 5 sets of experiments. 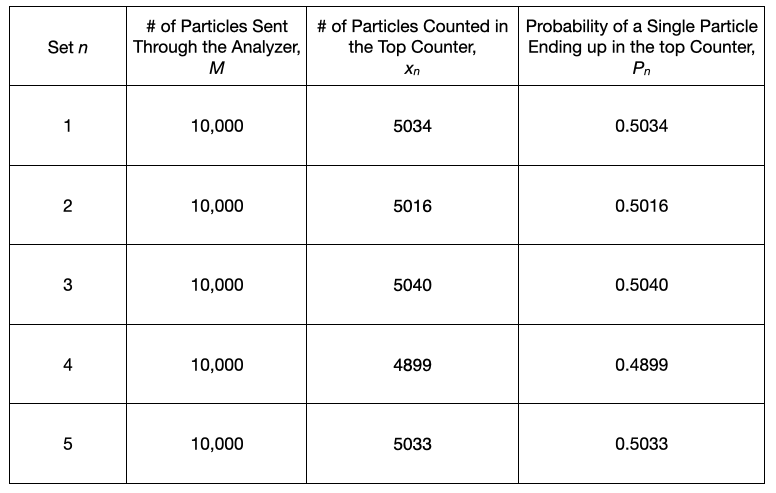 
\(\mathcal{P}_n\) is the probability I determine for 1 set of \(M\) Stern-Gerlach experiments.

\(N\) = the number of sets of Stern-Gerlach experiments (note: \(n\) is an index that indicates a single set of experiments)


\(\bar{\mathcal{P}}\) is the mean probability determined from \(N\) sets of \(M\) experiments. This will be my estimation of the true probability.

Best Estimate of the Probability: the Mean

The probability I determine for a set of experiments (like in the table above) is:

The mean of these probabilities is:

In order to quantify how spread out the distribution is, conceptually I'm tempted to find the average of the difference between each probability \(\mathcal{P}\) and the mean of the distribution. The problem with this approach is that this average should be zero - the average is at the center of all the observations!

One way to get around this is to square all the differences first. The variance is the squared difference between the probability for one set of SG experiments and the mean probability:

(see Taylor, pp. 147-148 for a nice derivation) If I only find one mean (\(\bar{\mathcal{P}}\) from my original \(N\) sets of Stern-Gerlach experiments), I can be confident that there is a 68% chance that my mean lies is within 1 standard error from the true value of the probability.

In the case of Stern-Gerlach experiments (which following a binomial distribution):

To answer the question of how confident I am in my estimates, I could choose to report the uncertainty as the standard deviation or the standard error. These two options have different meanings (for this discussion, I'm going to assume that \(M\) is large and we have an approximately normal distribution):

\(\bar{\mathcal{P}} \pm SD_{\mathcal{P}}\)
Meaning: If I do one more set of SG experiments, there is a 68% chance that the probability I measure will fall in this range.


\(\bar{\mathcal{P}} \pm StErr_{\mathcal{P}}\)
Meaning: If I repeat the entire exercise, doing \(N\) sets of \(M\) SG experiments, there is a 68% change that the average probability I determine will fall in this range.


In this case, the standard error of the mean is closer to the thing I mean by my confidence in my estimate.

If I wanted to compare my estimate of the probability to either (1) someone else's measurement or (2) a theoretically expected answer, both of which I'll call \(\mathcal{P}_{exp}\), I might describe the difference between values in terms of the number of standard errors.

\(t<2\) to be acceptable (“the discrepancy is insignificant”) and

\(t>2\) to be unacceptable (“the discrepancy between values is significant.”).

Differences that are \(t\approx 2\) (1.9-2.6) are generally considered inconclusive.

For a normal distribution, there is a 95% likelihood that the true values lies with 2 standard errors of mean, meaning \(t<2\).

Inferential statistical tests can be used to formally compare values, for example:

For each statistical test, a set of assumptions need to be met in order for the test to give reliable, meaningful results. For example, a one sample t-test assumes that the data are normally distributed.